The Rams have had the most productive offseason in the NFC West with the additions of Cortland Finnegan, Kendall Langford, and Scott Wells.

Unfortunately, they still have craters in key areas. The Rams have $14.6 million in cap space to fill the roster.

Obviously wide receiver is getting a ton of attention. Free agents flew off the board early. I think the Rams thought they had 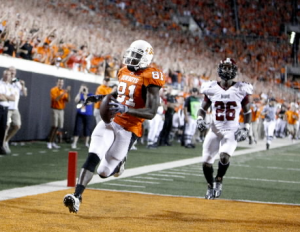 Mario Manningham (Giants) in the bag before rival SF 49ers swooped in and agreed to a 2-year deal. Manningham had a mediocre regular season before exploding for 3 TD’s in 4 playoff games. The problem? Alex Smith still quarterbacks SF (the only man “upset” making $24 mil).

They could risk the #33 overall pick and offer RFA Mike Wallace (Pittsburgh) a contract, but…

Justin Blackmon will likely be available when the Rams draft #6 overall in April. The teams drafting 1-5 have other needs. Colts and Redskins are drafting QB’s. Minnesota has glaring holes on the offensive line, especially with Steve Hutchinson bolting for Tennessee. Cleveland has a running back deficiency, and a plethora of solid WR’s. Tampa Bay signed Vincent Jackson to a huge contract, and need to find a replacement for the ageless Ronde Barber at cornerback…enter Morris Claiborne.

It’s encouraging the Rams are rebuilding the trenches with quality players. Though pathetic it’s still an issue, we can’t blame this regime…yet. They still need a guard (Jacob Bell could be re signed), but more alarming are the remaining holes on the defense.

Specifically outside linebackers. Let me just name some mediocre OLB’s the Rams have tried in the last couple years: Larry Grant, Brady Poppinga, Ben Leber, Chris Chamberlain, David Vobora, Bryan Kehl, David Nixon, Josh Hull … I could go on. It’s worse than the WR problem. Manny Lawson is a FA out of N.C. State, he would look good in blue and gold. 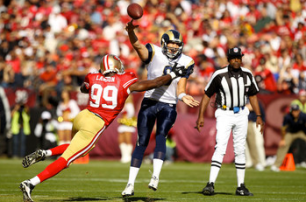 Manny Lawson harasses Sam Bradford in 2010 for the 49ers.

Another big question is what to do with Jason Smith, the 2nd overall pick in 2009. He’s played in only 29 games over 3 seasons, and has suffered 2 major concussions. Oh, and he’s due $10 million next season. If he won’t restructure (which he has no obligation of doing), he’s a goner.

The remaining roster holes will determine how quick Jeff Fisher and Les Snead can turn the Rams into contenders. Former Ram linebacker London Fletcher was an undrafted FA out of John Carroll. 14 seasons later, he’s a free agent again. As a 5’10 undersized LB, Fletcher once said,

“If you don’t have the heart to match that size, you’re not worth anything. Heart is something you can’t measure.”

These are the draft picks/free agent signings that make teams great. Finding diamonds in the rough has never been a problem for Fisher, let’s hope that continues.