EURO2012 starts today and you should care.  Here’s why.
by Frankie Reedy

They say Americans don’t enjoy soccer, but it stands to reason that the majority just doesn’t understand it. Sure

There can only be one.

most of us played it as kids and every four years we may or may not pretend to care about the World Cup, but how well do you understand “the beautiful game”?  Sure, I’m talking about tactics, statistics, and the like, but what I’m really getting at is the structure of the sport.

When American baseball, basketball, or football teams win their respective playoffs, they claim to be “World Champions”, but doesn’t this contradict the achievements of all the other professional leagues in the world?  In soccer, no such claims are made.

When American sports teams suffer poor seasons what are their consequences?  Lost income, sure.  Hell, after a string of bad seasons the team might see a change of ownership or even (gasp) relocation to kickstart a rebuilding period.  In soccer (on the club level, at least), you drop a league. 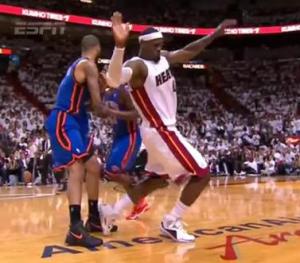 Maybe LeBron should try out for Italy

In American sports, a player at the club level usually only plays during the respective season.  For example, the US Men’s Basketball team doesn’t convene until the end of the NBA playoffs.  Meanwhile, a player in England could be involved in league games, two domestic cup tournaments, the continental Champions League/Europa Cup tournament and still get a call from the manager of his national team to appear in an international friendly in the midst.

You can contend that soccer is a pansy sport for short, slender Europeans who feign death at any sign of contact, but if you’ve watched the NBA playoffs at all this year, you can see this problem isn’t endemic to one sport by any means.  (My suggestion: stay away from Italian and Hispanic players, as they perpetuate the art of the dive more often)

Soccer, like it or love it, is infinitely more multifaceted than any American sport.  But, “WHAT ABOUT THE MLS?”… any inspection of that league will expose the gulf in class between the American flavor of the  game and the rest of the world.  The MLS is still structured as a franchise league putting teams at their owner’s mercy and preventing the type of promotion/relegation system that has been standardized in almost every other country.

Which leads me to what I came here to do: inform you, of the UEFA European Championship (you have my

Looking sharp, Landy, but not in the Euros.

permission to just call it the Euros), which starts today.  For the uninitiated, this tournament is the marquee event, the crème de la crème and so forth of the game of soccer, in my opinion.  The World Cup usually gets more attention, but apart from African teams like Côte d’Ivoire and of course our own boys (in their fantastic looking new kits), Europe is really the only continent with national teams worth a damn.

To further separate European soccer (alright, I’ve had enough—I’m going to start calling it football)…European football from American, think of all the times you’ve watched an international tournament in a sport and expected the US to win with ease.  Basketball is the first thing that comes to mind, but Americans typically fare well in hockey too.  (Can you imagine what a joke international American football would be?)  Such is not the case in the Euros.  Instead, you’ll see pronounced differences in style between the European nations, from the long-ball play of England to the quick, precision passing of Spain to the totaalvoetbal of Dutch teams of the past, each team comes to the tournament equipped with a different weapon.  And much like any Pokémon battle, strengths and weaknesses become readily apparent early on the tournament.

The Euros start out with four groups of four teams each, and like the World Cup, the top two teams from each group advance to an 8-team knockout round.  This year’s “group of death” where picking a winner and runner-up is beyond my betting prowess, is Group B, with Germany, the Netherlands, Portugal and Denmark. ESPN is again slated to show all games through its ESPN3/WatchESPN service, so there’s really no reason to not glue yourself to a television set for the entire month of June.

I’ll be back in a few weeks at for team analysis at the start of the knockout rounds.  Thanks to Nater for letting me rant and GO GERMANY!