It is official. Carmelo Anthony is a New York Knick.

As a part of the deal, the Knicks will send Wilson Chandler, Raymond Felton, Danilo Gallinari, Timofey Mozgov, and a 2014 first-round draft pick to the Nuggets, who would get additional picks and cash, according to the Denver Post. Along with Anthony, New York would acquire Chauncey Billups, Shelden Williams, Anthony Carter and Renaldo Balkman, the newspaper reported.

New York will send Anthony Randolph and Eddy Curry to Minnesota as part of the deal and in exchange, the Knicks will get Corey Brewer.

Carmelo Anthony wants to be a New York Knick. 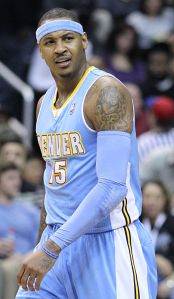 The trade deadline is February 24th.

Anthony was born and raised in Brooklyn, New York. He attended Syracuse University where he led them to their first ever NCAA Tournament title in 2003. Drafted by the Denver Nuggets #3 overall in the 2003 NBA draft, ‘Melo delivered an immediate impact for a struggling

A fan favorite in Denver, Melo has led the Nuggets to 7 consecutive playoff births. In 45 career playoff games, Melo is averaging just under 25 points per game.

His contract is up after the current season and with labor negotiations expiring, it is important for Anthony to sign a contract extension prior to becoming a free agent. (Proposals for the new labor contracts include less money for the players)

Carmelo has not been shy about his eagerness to return to New York. Manhattan specifically. He wants to play for Mike D’Antoni and the Knick organization.

Meanwhile, the New Jersey Nets are offering a better package of players, more draft picks, and the chance for Carmelo to be reunited in his hometown of Brooklyn. Unfortunately, the Nets are not the Knicks. They lack an all star big man

in Amare Stoudemire and many other key components that the Knicks already have in place.

Carmelo can hold the Nuggets hostage because any deal that is signed off on must include a contract extension for Anthony. He is not going to sign anywhere in the NBA unless it reads: New York Knicks. Face the facts. Call him whatever you so choose-but Anthony will end up a New York Knick. It is not a matter of if, but when.