Chris Stewart notches a clutch OT goal as the Blues win on the road.

The St. Louis Blues battled a lot of adversity in their previous two games versus the Columbus Bluejackets.

Monday night in St. Louis, the first period included six goals, two different fights, and 30 penalty minutes. Chris Stewart and Cam Janssen got the crowd into the game early with big fights in the first 3 minutes of the hockey game. Patrik Berglund answered with the game’s first goal.

Columbus striked back with 3 unanswered goals. Coach Davis Payne opted to pull goalie Ty Conklin in favor of Ben Bishop. Bishop was outstanding in relief. He stopped 19/20 shots and made a clutch save in the OT shootout to seal the victory.

The Blues power play closed the 1st period with two goals to even the score at 3. Andy McDonald scored his 15th goal of the season while T.J. Oshie netted his 7th.

McDonald would score again in the second period on a wrap around goal that confused Bluejackets goaltender Steve Mason. Four minutes later Columbus tied the game on a goal by Derek MacKenzie.

The Blues would go on to win the game in a shootout. They converted on 3/4 chances. 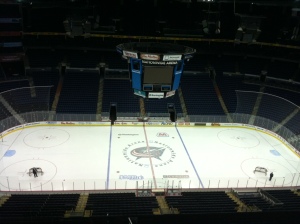 In the second game of their home and home, the Blues got a big piece of their team back in the lineup. Goalie Jaro Halak returned to action after missing 11 games with a broken hand.

The Blues, 13th in the West, spotted Columbus a 3-0 lead in the second period, then rallied for a 4-3 win at Nationwide Arena.

Chris Stewart flicked in a backhander 54 seconds into overtime to cap the comeback. He crashed the net on a rush from the left wing and wafted the puck over the right shoulder of goalie Mathieu Garon, nearly knocking his water bottle to the ice.

The Blues needed just 6:23 of the third period to overcome the 3-1 deficit.

Ian Cole, who had a goal waved off in the opening period, picked up his first career tally at 2:32 when his slap shot from the right side glanced off Garon’s shoulder and fell into the net. Stewart got the tying goal by tipping in another Cole shot.

Stewart now has 9 goals in 11 games since coming over in a trade from Colorado in late February.

The Blues’ playoff chances are basically hopeless but at least they are continuing to fight their way to the finish line.