Cardinals outfielder Lance Berkman was supposed to be washed-up, overweight, and no longer the RBI producer he once was. 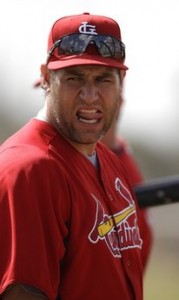 Through 20 games, Berkman is hitting a cool .378 with 6 homeruns and 16 runs batted in. Considering he hit .248 with 14 HR’s last year, this is a much faster start for the former Astro outfielder.

He lost 20 pounds in the off season to help recover from major knee surgery and put an added emphasis to get back in shape and have success in the major leagues once again.

The Cardinals travel to Houston for the first time in 2011 this week and it will be a strange visit for Berkman. He played 11 seasons in an Astros uniform prior to being dealt at the trade deadline last year to the Yankees.

When asked why he has been so productive this year Berkman said,

“I think a lot of it has to do with being healthy. Last year was a tough year for me on a couple of levels and a big part of that was not having spring training and having to deal with that knee all year. This year feels a lot different. I feel like I’m more my normal self in terms of the physical part of it. Let’s hope that continues.”

For everyone’s sake, lets hope that Lance continues to see the ball as he is right now because it is paying huge dividends.