You hear him on the radio, and now you read his insight. It’s Vic Porcelli talking poker.

Poker is a game of information.  To borrow a phrase from 1983 World Series of  Poker Main Event champ, Tom McEvoy, “…Poker is not a card game with people, it is a people game with cards.”  So how do we gather information about our opponents?  The first thing to learn is to not over think it. 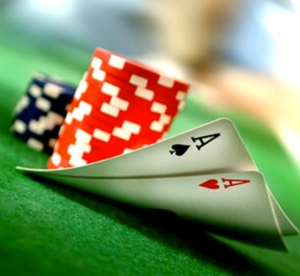 Let’s look at information that is a little less intricate than observing how your opponent breathes after he makes a big bet, or if the vein in his neck is protruding after looking at his hand. (both of which are parts of gathering information in the form of “tells”)

Let’s start with some much more basic information.  Just listen.  Believe it or not, sometimes the information just comes to you.  Let me give you one example.
I was playing in a tournament at a local casino.  The buy in was anywhere from $50 to $70 with 60 people in the tournament.  About an hour into the tournament the player to my left goes all in pre flop after some raising and re-raising action.  His hand was A Q.  He was up against A A and was knocked out of the tournament.  After he walked away from the table, the guy two seats away to my left leaned into me and said, “That will be the day when I put my tournament life on the line without a made hand and it better be Aces or Kings.”   I didn’t respond.  I just gave him an approving nod.

Sure enough two hours later, at the final table, that same guy goes all in on me.  My hand was 10 10.   Normally in a situation like this I would give you much more information about the situation like table position, stack size and calculating “M.”  However this is just a lesson in gathering information on opponents.   My thoughts were: “Final table. I’ve already cashed.  There were only six people at the table making 10 10 a very strong hand.”   Then my thoughts turned to the opponent who is now raising me all in,  “That will be the day when I put my tournament life on the line without a made hand and it better be Aces or Kings.”

I made my decision.  I was going to lay down my 10’s.  But I wanted to be sure I was making the right decision.  I wanted to see his hand.  So I chatted with him a little before I folded.  “I have a really strong hand here.  This is a really tough lay down.”   I turned up my cards to show him I was laying down my 10’s to him.  And he proudly showed me his pocket kings.

A few positive things happened to me on this hand.  First of all, and most importantly  I saved my stack.  I was still alive.  Secondly I got immediate respect from the entire table for laying down pocket 10’s.  Getting credit for a “great read.”   A tight table image was immediately solidified.  By the way, a few hands later a player who had been aggressive the entire tournament raised from the button and I had the same hand, 10 10.  I re-raised him and he folded.

Getting back to the subject of information on your opponent, I used information the player offered me, totally unsolicited.  Pay attention to everything players are saying.  Sometime they may just offer up some valuable information that you use against them later.

The end result of that tournament for me.  I went out in third place after taking a bad beat, but I’m sure you don’t want to hear about my bad beat.  That will be the subject of my next column, “Don’t tell me your bad beat.”