By Cannon Huge
With Chris Carpenter battling father time and Adam Wainwright coming off Tommy John surgery, Garcia must progress in 2012. Carpenter enters his 15th season as a grizzly 36-year-old veteran with a combined 472.1 IP navigated over the last 2 seasons. Wainwright has a new ligament in his right elbow, a procedure both Carp and Jaime are quite familiar with.

The time has come for Jaimie to become a CONSISTENT impact starting pitcher. It’s foolish to think Carp can shoulder the absolute 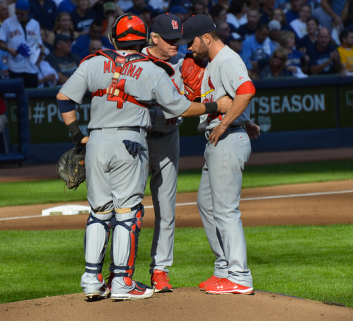 bulldog role for much longer. 2012 offers a prime opportunity for Jaime to legitimize his presence in the rotation. The organization has raved about his natural movement since drafted in 2005. We’ve seen glimpses, including his two-hit complete game shutout against Milwaukee last May. Garcia needs to escalate his game to the level of a legitimate #2  and finally show consistent performance at a high level.

At 25, he must rise above all the mental issues he apparently struggles with. His experience in the 2011 postseason should be a catalyst for his progression. Though at times it was nothing more than abysmal, pitching in the post season is a vital part of the learning process.

Carpenter mentored Wainwright, influencing that killer instinct that he now possesses on the mound. Perhaps now is the time for Wainwright to take Garcia under his wing in that very same way. Knowing Yadi will be calling signals for the foreseeable future is a major asset for Garcia. 2012 will be a defining season for the star left-hander. If Carpenter or Waino were to miss extended periods of time, Garcia has to answer the bell with the same tenacity. Without it, the Cardinals will struggle to repeat.