Just another huge win for the Birds tonight in the first of a four game set against the first place San Francisco Giants.

I admit, I told my comrade Tony Randazzo that the bullpen should start warming up following Angel Pagan’s 5th carer leadoff homerun. Jake Westbrook proved me wrong. He pitched a stellar 6 innings continuing his 11 game steak of 6+ innings pitched. A major factor was his efficiency. Westbrook, a career .500 pitcher, did not walk a single Giant, but issued two solo shots.

It started with Carlos Beltran, an MVP candidate. He tied the game with his 328th career bomb in the 2nd inning. Beltran hit just .200 in July. When asked about his struggles, he gave a similar answer to the ‘Man in 1956. He’s a future Hall of Famer, book it.

Matt Holliday continued his torrid streak, knocking his team-leading 28th double of the year in the 6th inning. A 2-2 game at the time, Holliday tagged from 2nd base on a line drive off Beltran’s bat. He scored on a David Freese sac fly, making it 3-2. That’s fundamental baseball. 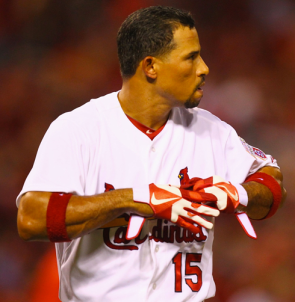 Rafeal Furcal’s 10 pitch at-bat in the 2nd inning was flat out great. He saw 21 of his 24 pitches tonight from starter Matt Cain, delivering twice. His single in the 2nd was just as clutch as his 10-pitch walk in the 6th.

Sure enough it led to Matt Carpenter putting the Giants in a blender with his 2-out, 2-run single. Carpenter can play some ball, folks. He has 8 RBI in 19 pinch-hit AB’s this season.

I like how the Cardinals are playing right now. Timely hitting, quality starting pitching, dominant relief. Who wouldn’t like that combo? The acquisition of Edward Mujica is paying serious dividends. Remember the bullpen in 2011? They made history with innings-pitched during the magical postseason ride, and “Chief” Mujica has stabilized a once dreaded bullpen.

Forget records, standings, and statistics. This team looks poised for another Championship run in 2012.

Dear Reds, the Puma has a message …