A weekend in Columbia, Missouri may have taken me out of my element for a day or two, but I was back home in time to lay on my ass for seven hours and watch the greatest channel ever, the NFL Red Zone, as well as find some solid material for a weekend grind.

The Jets now have both Tebow and Sanchez, and the QB controversy is underway.

As previously mentioned, if you haven’t purchased the NFL Red Zone, your going to want to get on that. Even a weekend where special teams dominated, I still enjoyed every moment of the greatest league going. Greg Zuerlein is the best kicker in the league already. Tenth longest field goal of all time, and the first kicker in the history of the NFL with two field goals of 55+ yards in one game. All in the fourth week of his career.

Now the ugly side of special teams: the Detroit Lions. Defense didn’t allow the Minnesota Vikings to score a touchdown, yet they lost because they allowed a kickoff return for a touchdown on first play of the game, and then a punt return for a touchdown right out of the gates in the second half. Seven missed tackles combined on the two plays. That’s pathetic.

There’s a new story developing in the NFL, the New York Jets. “The Sanchise” Mark Sanchez continues to put up some of the worst numbers in the history of the NFL. Who’s worse? Only Tim Tebow last season in Denver, but he stepped up and carried a beleaguered offense all the way into the second round of the NFL playoffs. The Jets have a distinct memory of Tebow, as he beat them last year running for a TD in the final minutes of their match up last season.

Things to consider here: If Mark Sanchez played for any other coach, would he still have a job? (Will Eva Longoria dump him when he loses his starting job?) Who is to blame for the poor performance? Is Sanchez really that bad, or is the lack of blocking and running game making it harder on him? More importantly, does this team immediately get better with Tim Tebow under center? Answers to come, soon I imagine.

The ‘real’ refs are back and blowing calls. Just check the New Orleans at Green Bay film, where a clear incompletion was ruled complete after video review, and a clear fumble and recovery by the Packers resulted in a Saints first down. Justice was served, wide left, Packers win. 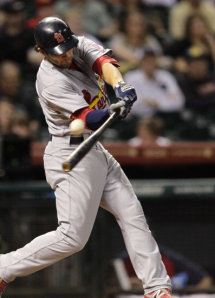 Honus Kozma? The Cardinals first round draft pick Pete Kozma (18th overall) of the 2007 draft is starting to ball. A career .236 hitter in the minors, and victim of the Tyler Greene disease (striking out more than hitting in 2011), Kozma might just be the savior of this team. When Rafeal Furcal went down, I thought this team was hosed. Losing his defense was critical, and it left Daniel Descalso as the everyday shortstop. Now, Kozma is hitting for average (.338) and power (14 RBI).

One beef I have right now is the lack of play for Skip Schumaker. With just five at bats in the last week, he is playing second fiddle to Descalso, who has done nothing offensively this season. I just don’t understand how a guy like Schumaker, who has done everything, can’t get a starting role. I would like to see #55 in the starting lineup everyday form here on out (pipe dream). Improve the everyday lineup and insert the Schu Man.

Will the real Carlos Beltran please stand up? He has been playing on one leg all season. Now, if this guy gets hot heading into the post season, no worries for the Cardinals offense.

NHL (or lack there of)

I have been heavily critical of the NHL, tearing it down as the least popular league for a reason, and a league I could care less about. But this is actually starting to trouble me. This is a league that just started to win back some casual fans and started gaining momentum in the landscape of sports. Now the NHL takes this lockout hit setting them back five years, or maybe worse, killing the league. Even its diehard fans are ripping it now, campaigning to fire commissioner Gary Bettman.

Players are starting to pursue work overseas, but unlike last time, I think they will stay there, viewing it as a permanent move and not a temporary one.

Lakers and Heat in the finals. I can’t wait.