I’m late with this, but I was busy watching Danario Alexander haul in two Charger touchdowns during a complete annihilation of the Pittsburgh Steelers.

Today I watched the game in its entirety to break it down, albeit two days later.

The Rams defense is flying around. The emerging d-line had 11 quarterback hits and 4 sacks against Ryan Fitzpatrick.

Michael Brockers is playing like a beast, quieting the naysayers who ripped the first round pick last April. The Rams have won all four games against teams who rank 6th or higher in total rushing. They can make that five next week when Adrian Peterson visits the Dome.

Safety Quentin Mikell had a nice day, knocking a fumble out of Fred Jackson’s arms deep inside the Rams’ territory, and helped take down Fitz on what turned out as a huge play late in the game.

The Rams have a lot of guys playing hard, but execution is another story.

Take Brandon Gibson. The guy has hands, but his route running is a joke. None of the wide receivers win their match ups in man coverage. At one point FOX broadcaster Mike Martz criticized Gibson after slipping, “The receiver fell down which should really never happen”.

Brandon Gibson #11 of the St. Louis Rams salutes with his teammate Austin Pettis #18

Gibby is an interesting player. 5 TD’s this season (3 in 4th quarter), but the previous two weeks he went without a catch. Against Buffalo: 9 targets, 6 catches, and some big time catches, including the game winner.

Bills defensive coordinator Dave Wannstedt had success blitzing in the first half. The Rams didn’t pick up a first down until the 2nd quarter. The offensive line struggled with Mario Williams, until he ran out of gas in the 4th quarter. Give credit to Rodger Saffold who twice left the game with a back injury only to return.

The 10-play, 6 1/2 minute drive out of first half broke a seven-quarter TD drought … they converted three first downs.

Lance Kendricks had three catches including a nice 22-yard grab on the game winning drive.

But the catch of the day belonged to Austin Pettis:

Sam Bradford had a QB rating of 0.1 after accumulating 37-yards in the first half, but completed his fourth career game winning drive in confident fashion. He fought against a strong pass rush early, even flashing his speed with 4 rushes, including a 3rd-down, 11-yard conversion. He forced a terrible interception throwing into double coverage, and got lucky when Bills safety George Wilson whiffed on two bad throws on the final scoring drive. Sam completely misread a blitz protection in the 2nd quarter on a key 3rd-down. Granted, Chris Givens dropped a sure TD on a great deep throw, and the receivers struggled getting separation. Anytime you quarterback a 14-play, 84-yard game winning drive, its worth something.

The Bills allowed 78 yards rushing, extending their streak to four games of holding opponents under 90. That’s the team’s best stretch since a four-game streak in 1999. Give credit to their unit, they played some good football.

John Fassel’s group did a nice job containing Leodis McKelvin, the dangerous return man. Johnny Hekker somehow got a punt off after fumbling a snap…and what could have been a disaster led to a three-and-out for Buffalo. 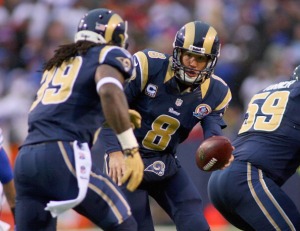 Brian Schottenheimer made great halftime adjustments, creating more 3-step drops to get the ball out quicker. He also never abandoned the rushing attack, regardless of down-and-distance or what the clock said. Steven Jackson had carries of 9- and 7-yard gains early in the GW drive–effective because Buffalo had to play pass defense.

Jeff Fisher has the team 6-6-1, and in the playoff hunt for the first time since 2010, which people seem to forget. Of course, not if you’ve read Daily Grind Sports.

The Rams won three in a row for the first time since 2006, and control the playoff picture with games against Minnesota, Tampa Bay, and Seattle to finish the season.