Breaking down the Bucs, Schottenheimer, and debunking the motivational approach.

After 15 seasons playing cornerback, the Bucs moved Ronde Barber to safety. Barber, a five-time Pro Bowler, has four interceptions, his most since 2008, and through 14 games already has 84 tackles, most since 2006 when he had 100. Barber’s play has not tailed off one bit despite a position move in his 16th season. Pretty impressive. Both he and rookie Mark Barron (Alabama) are very active in run defense.

The Bucs are big up front, with good speed. Gerald McCoy (6’4 300) and Michael Bennett

(6’4 274) anchor the left side of the defensive line. Rookie De’Quan Bowers has boosted the pass rush since returning from an Achilles injury he suffered during the offseason. But the Bucs miss Adrian Clayborn’s (Webster Groves) presence, as he and Bowers were supposed to make the defensive line a serious threat. Instead, the two never saw the field together in 2012.

The Bucs have a lot invested up front:

Offensively, its obvious the Bucs like to get Doug Martin the football. Get opposing defenses to slip a safety into the box and get man coverage on the outside with receivers Vincent Jackson and Mike Williams.

Robert Quinn whiffed high on Christian Ponder last week leading to a Vikings touchdown. The Rams must tackle Josh Freeman low or it could be a long day for the secondary.

Jeff Fisher reiterated, “Everybody in the building is walking around with the attitude not that we lost the game to Minnesota but they’ve won three out of the last four. So let’s go win the next one.”

Assistant head coach Dave McGinnis said at no point during his 27-year career has motivation been an issue.

Sunday is a big game for the Rams. Forget playoff implications, .500 record, etc. This is about proving as an organization that regardless of the circumstances, the Rams can win a football game on the road against a quality opponent. 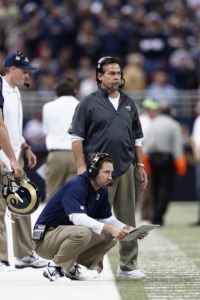 Frankly, the head coach talk is nothing surprising. I wrote when Fisher got the gig that the only con hiring his experienced assistants meant they were vulnerable to bigger opportunities.

Since becoming a coordinator in 2006, Schotty’s offense has ranked 20th or worse FIVE TIMES in total yards. The 2012 Rams rank 27th in points scored, and he’s working with a running back on the verge of history, and a former 1st overall draft pick.

Of course he comes from a strong pedigree, and the NFL is a big coaching fraternity. Brian, son of the legendary Marty Schottenheimer, will always have that last name to cling on.

Fisher said that Schotty was “ready” to become a head coach, and that the offensive system in place would not change. This is not entirely true, as Fisher mentioned at his introductory presser that the offense wouldn’t drastically change from what Josh McDaniels did a year ago…and its almost a 180 degree difference. Though all systems include a lot of the same schemes, the terminology is inevitably different. Unless QB coach Frank Cignetti is promoted from within…Sam Bradford could be looking at his fourth coordinator in four years.

After all, the Cleveland Browns shocked the world hiring Pat Shurmur in 2010.