The Rams season concludes at CenturyLink Field in Seattle, a place the Rams — and the rest of the NFL — haven’t done much winning.

The Seahawks’ 7-0 home record has one asterisk (Green Bay), but their home/road splits are 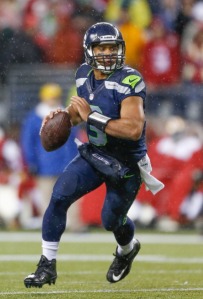 alarming. They score 10 more points per game at home (31.8) and hold opposing offenses to under 12 points a game. The last time St. Louis won at Seattle was a 2004-05 playoff game.

They benefit from the loudest stadium in sports, backed up after a seismic network recorded a small tremor directly after Mashawn Lynch’s epic touchdown run during a playoff game against New Orleans.

While the Seahawks are heading back to the playoffs, the Rams will try to secure their first winning season since going 12-4 nine years ago. Sam Bradford downplayed this as his biggest game ever, but one could certainly make the case. A win would keep the Rams undefeated against NFC West foes, and would propel them into 2013 on a high note having won five of their last six games.

The Rams defeated these same SeaGirls in Week 4, 19-13, thanks to a terrific special teams 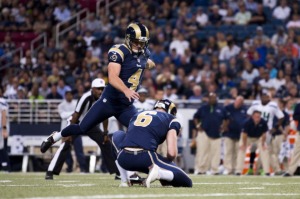 Seattle though, has improved drastically. Led by their rookie QB Russell Wilson, Seattle has scored 150 points over its last three games, most by an NFL team during a three-game span since 1950. A healthy receiving corp, and the second-ranked rushing offense has this team on fire.

But, their due for a hiccup, and the Rams know the recipe.

KEYS TO THE GAME: DEFENSIVELY

Slow down Seattle. When they start fast — and they do — things get out of hand quickly. Over those last three games, the Seahawks have averaged nearly 13 points in the first quarter alone. When they get ahead, it allows their defense to pin back and get after the quarterback.

The Rams picked off Wilson three times in their Week 4 win. Wilson was trying to engineer a game winning drive but his receiver fell down, and Bradley Fletcher sealed a Rams victory. Wilson’s thrown 16 TD passes and just 2 interceptions this year at home. The Rams defense will look to build off their four INT day a week ago.

Wilson is earning praise for his athletic showing against San Francisco on Sunday Night Football, but Robert Quinn was quick to point out how athletic the Rams’ defensive linemen are. Their 46-sacks as a team ranks 3rd in the NFL. They had two sacks and four QB hits against Wilson in Week 4.

Whose Hot: William Hayes has 4.5 sacks, 3 stuffs, and 1 pass deflected over his last five games.

Quinn, though he leads the team with 9.5 sacks, has just one in his last six games.

WHAT TO WATCH FOR

The Seahawks are running the football, a lot. They have run 36 option plays over their last four games after running five option plays in their first 11 games. They average a league best 6.2 yards per carry over that span with 10 rushing touchdowns.

Sidney Rice (6’4 202) has emerged despite battling a knee injury. When healthy, he provides Wilson the big play threat down field. With teams stacking the box with an extra defender to stop Lynch, Wilson has favorable one-on-one match ups outside. On throws more than 10 yards downfield against St. Louis, Wilson was 3-for-8 for 48 yards and two interceptions.

Washington is a superb return man. He had a 69-yard return in the previous game, and owns 8 touchdowns on kickoff returns. This guy is explosive, watch out.