The best thing to take away from the Rams’ 20-13 loss to the Seahawks is Craig Dahl will no longer don the blue and gold. 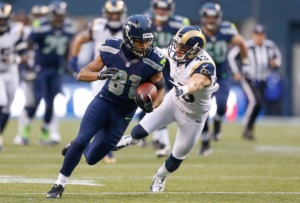 Dahl, a pending free agent, may find work hard to come by this offseason. He bites on play-action, and can’t tackle for a lick…concerning considering he’s a free safety. Dahl started all 16 games, which should tell us about backup Darian Stewart’s potential, and their draft plans come April.

The Rams defensive effort was excellent aside from two Seattle possessions late in the game. They sacked Russell Wilson six times, and added seven quarterback hits. Chris Long had a field day on Breno Giacomini collecting three sacks and five hurries on 28 pass rushes. But Wilson ultimately proved his worth.

Wilson completed 8-of-9 passes for 173 yards on throws outside the pocket, including the 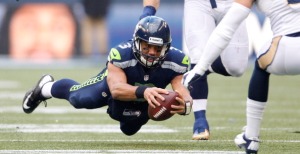 44-yard dagger to Golden Tate on the Seahawks’ game-winning touchdown drive. He had an accuracy percentage of 94.4%.

Trumaine Johnson lost the jump-ball effort to Tate, who then easily eluded Dahl. Ram defenders had 16 missed tackles, Dahl had three. Johnson played well, but the deep ball hurt, and he also dropped a sure interception.

Wilson orchestrated his fourth comeback of 2012, while Bradford’s attempt stalled at the Seattle 29 when he threw an interception to Richard Sherman. Wilson had 250 passing yards and 58 rushing yards, accounting for both Seattle touchdowns.

The Rams had 14-penalties worth 98-yards, including two crucial offside penalties 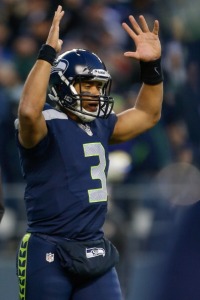 on Eugene Sims. Pro Football Focus ranked Sims on their ‘Had A Bad Day’ for Week 17.

While the Rams deserve credit for fighting in a so-called ‘meaningless’ game, they also failed to secure an undefeated NFC West record, a winning record, and a win at Seattle.

The Seahawks should thank St. Louis for the tune-up before heading to Washington this weekend for their Wild Card Playoff Matchup.

The Rams fought, clawed, and scratched despite coming up short. The 2012 season is over, and so are the days of watching #43.