Sorry had to do it. Thoughts on the game and my favorite commercials. 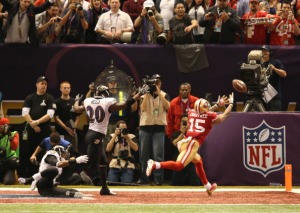 Jim Harbaugh can gripe all he wants about the officiating in Super Bowl XLVII, but it’s odd considering he preaches physicality and a “play through the whistle” style. Jerome Boger and his crew called a consistent, ‘let them play’ game’. While obvious non-called penalties should not affect the outcome, neither should yellow laundry.

This game was chippy from the first whistle, and the only 15-yard penalties (after whistle) were offset. Referees respect what’s at stake, and they refrained from letting their emotions kick in. Considering how aggressive they let defenders play all night, the Michael Crabtree fade to the end zone was properly called. Heck, Torrey Smith had a sure TD in the first half denied thanks to two 49er defenders hanging onto him. Keep the flags in the pocket, solid game.

LaMichael James’ fumble in the 2nd quarter was a game changer. SF had marched inside the Baltimore 25 when Courtney Upshaw popped the ball loose. Baltimore capitalized on the turnover with a touchdown, and instead of a potential 10-7 deficit, they led 14-3.

Anquan Boldin finished with six grabs for 104 yards, including a clutch, 3rd-down score on the opening drive. Joe Flacco targeted him 10 times, completing three first downs. Boldin seems to either hide or blow up a box score, and he put on a show Sunday.

Speaking of Flacco, he just landed a ton of money…probably upwards of $20 million per season. Pretty amazing what he has accomplished in such a short career. Flacco’s ability to extend the play and create drive-changing throws are part of what make him such a special player. How he found Boldin on a broken 3rd-down conversion downfield is beyond words.

Ravens punter Sam Koch was having a forgettable day before the safety. Koch had two touchbacks, one for a net of just 22 yards, and his botched punt set up Frank Gores 6-yard TD run to make it 28-20 Baltimore. But, when you drain eight seconds before taking a designed safety to leave just :04 to play … we forget about those previous mishaps.

Both teams dealt with, and overcame a ton of adversity. San Francisco fought back from a 22-point deficit. Baltimore endured the 17-point SF run in the 3rd quarter and put together a 5 minute 16 second drive, getting three clutch first downs before Justin Tucker drilled a 19-yard field goal to stop the bleeding.

And then both teams waited through “power-gate”. Inexcusable, pathetic, ridiculous … how does that happen! John Harbaugh let loose on an official during the 35-minute delay, and rightfully so. It staged the 49ers comeback, in part because they heard Shannon Sharpe projecting so on national TV. That was a disgrace.

Colin Kaepernick proved himself (to those who didn’t believe before). This kid can play some football. Some 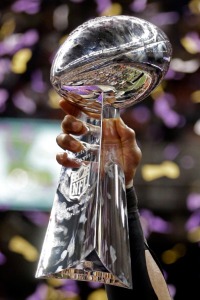 throws he made were flat-out sick. How he can put so much mustard on throws when he’s off-balance and under pressure is a testament to his skill set. Ultimately, inexperience did catch up. He burned a precious timeout on 1st down with 7:53 in the 3rd quarter down 28-6, and had a rather mediocre 2nd quarter when the game got a bit big for him. Overall, he’ll learn from this and will likely have another shot at the Lombardi Trophy.

Super Bowl XLVII was fun, thrilling, and strange. Good for Ray Lewis, who won on his “last ride”. Great officiating. Memorable matchup between the Harbaugh brothers, and hopefully Jim doesn’t jump off the Golden Gate Bridge…

Taco Bell — old people portraying people like you and I during 3 A.M. T Bell runs.

Jeep/USO — Cheesy, I know … but something about America and Football… Can’t have one without the other.

Mercedes because that car is a beauty.