Cory Emmerton #25 of the Detroit Red Wings scores a goal

Right now the quickest fix for most NHL teams includes a visit the ‘ole 14th and Clark, where the St. Louis Blues are realizing you don’t actually win Lord Stanley just because you’re a touted favorite.

The swagger they play with at times is hilarious. They haven’t won but one playoff series since 2005. This particular squad hasn’t “had the right fit” with Andy Murray or Davis Payne, and the grumblings for Ken Hitchcock’s head are both 1) ludicrous 2) overreaction. Nothing is more disturbing than a young team skating through the motions. This is the National Hockey League…there are no cake walks. Especially in a condensed season, getting smoked on home ice is just pathetic.

Opponents have scored 16 goals in the previous three contests. It’s been said — the problems are a lack of team defense. Hitch says the players are cheating the game, “Individual agenda’s. What’s good for me?” 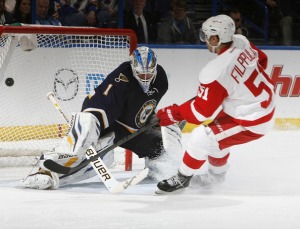 Valtteri Filppula #51 of the Detroit Red Wings scores a goal

While it’s unfair to blame Brian Elliott for the meltdown, he certainly has both feet in the water. Elliott has coughed up more juicy rebounds in two games than he did all last season. Cover the damn puck.

When Alex Pietrangelo, Kevin Shattenkirk and Barret Jackman lead the offensive odd man rush, consider the play broken. Part of these “track meet” goals is because defenders are getting way too aggressive. What happened to the scoring threat?

The Blues competed Thursday, a step forward from the Nashville debacle. Unfortunately, they were still a step behind Detroit. The Red Wings played stout defensively in front of 20-year old Petr Mrazek, who looked solid in his first career NHL game.

The Blues’ 3rd and 4th lines were completely outplayed. Seven Red Wings earned their first point of the season. The 4-on-3 power play was as pedestrian as they come, no creativity whatsoever. The Blues are now 1-4 when they trail first.

Hitchcock said on Wednesday he feared the hockey gods would make the team pay for their passive play, and here we are. Things don’t get any easier Saturday with the surging Anaheim Ducks (7-1-1) in town followed by the reigning champion LA Kings.