The Cardinals enter the 2013 season carrying only two starting pitchers who have passed the 200-inning threshold in their career. 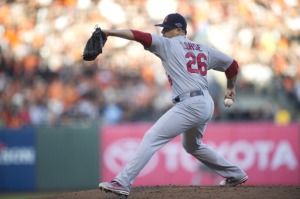 With Kyle Lohse gone (and somehow still on the market) and Chris Carpenter, the man who amassed four 200+ inning seasons during his six full (injury – free) seasons out, the Redbirds need another workhorse to emerge.

The Cardinals have ranked among the top four teams in IP (starters) each of the last four seasons, three of which included playoff runs with one culminating in their 11th World Championship. They have had AT LEAST two starters surpass 190 innings each of the last five seasons.

The staff ace pitched 198 2/3 innings one year removed from Tommy John surgery. Waino led the league with 233 IP’s in 2009, and has recorded 200+ three times throughout his impressive 7-year career, five as a starting pitcher.

Westbrook accomplished the 200+ inning feat in three consecutive seasons early in his career, but that streak ended seven seasons ago (04, 05, 06). Since, he has exceeded 180 innings only twice, including 202 IP in 2010, the year Cleveland traded him to St. Louis.

Aside from Westbrook and Waino, the remaining candidates have unproven track records. Granted, Lance Lynn and Jaimie Garcia are still developing, those vying for the 5th rotation spot have had little opportunity to prove their durability.

Not acknowledging known starting pitching depth could potentially serve as the pitfall for the 2013 Redbirds.

Lynn was on pace for 200+ last season, earning an All-Star bid with 11 first-half wins. But he quickly faded, blowing up in August with a 6.66 ERA, only 120 innings into his season. Lynn showed up to Spring Training down at least 20 pounds after admitting his weight fatigued him down the stretch.

Jaimie started 32 games covering 194 2/3 innings in 2011, but his sketchy injury history and overall under achievement has many questioning his consistency. Garcia started only 20 games in 2012, throwing 121 2/3 innings. Relying on Garcia is risky.

Joe Kelly showed flashes last year, especially in July when he pitched 30 1/3 innings over 5 starts with a 2.67 ERA. Opponents hit just .204 throughout the month. Kelly is only 24 years old with one year of MLB service, but he adapted the bulldog mentality of Carp and Waino and really seemed unfazed by the big league stage. Still, he hasn’t had nearly enough time to show what type of pitcher he will be over a 162-game season.

Shelby Miller and Trevor Rosenthal (both 22) have only 48 1/3 innings combined of MLB experience (playoffs included). Though largely impressive, it’s naïve to think either could close in on 200 innings as a first-year starter.

With Waino the safest bet to pass 200, the remaining four spots are essentially unknown. Who will show the ability to throw together 32 starts averaging roughly 6 IP’s per outing? History shows successful teams need at least two bulldog starters. Lynn showed he could string together quality starts early in 2012, but that festered with the August heat. Jaimie is simply Jaimie at this point; hard to say which way he’ll go from here. Kelly, Rosenthal, and Miller are unproven.

Exactly who replaces Lohse’s 211 IP and 33 starts is TBD, but another workhorse must emerge in order to contend for the NL Central crown.