Atlantic-10 Champions! So Long, Quintin…Blues Notes and an Incredible Dunk

The St. Louis U. Billikens officially won the Atlantic-10 conference outright Sunday after Temple erased a 16-point deficit to deny VCU any piece of the crown. The Billikens win over La Salle on Saturday helped clinch a No. 1 seed at next week’s A-10 Championship in Brooklyn.

It’s been a remarkable ride for SLU. They lost their leader Rick Majerus unexpectedly after he guided them to a 27-5 record last season including their first NCAA tournament win since the 1999-‘00 season. Majerus’ death brought uncertainty to a program he helped rebuild into relevancy. No one quite knew what would happen next…aside from his players.

The close-knit squad that Majerus would humorously remind was “not that good”, also learned to play as a team, focusing on the most fundamental aspects of sound basketball; defense, defense, and defense.

When assistant coach Jim Crews was named interim coach, Crews decided to keep the system Majerus had installed — something he says the players knew better than himself. Apparently the formula paid off because the Billikens topped the A-10 in scoring defense yielding just 57.6 PPG, good for 21st in the country.

Dwayne Evans led the team averaging 12.9 PPG and 7.6 rebounds per game. Evans, a junior from Bolingbrook, Illinois, is SLU’s best all-around athlete — but he credits his teammates for his success.

Evans echoes the entire SLU mantra: play for one another, play for Majerus, and play for the love of basketball. Evans recorded his 5th double-double against La Salle, giving him 17 for his career. He finished the regular season with 13 straight contests scoring in double figures.

Jordair Jett shot 54% from the field in 16 conference games, and Rob Loe finished 5th in the A-10 draining 43% from deep.

How far these Billikens go is unknown. They need better rebounding (11th – A-10 in both offensive and defensive boards), more scoring (68.7 PPG/10th A-10), and increased charity stripe success (72% FT) … but nobody likes to be guarded, so the beat goes on.

Two years into a 4-year, $27 million contract, Quintin Mikell is back on the market after the Rams parted ways with the 33-year old safety. Mikell actually graded out as a top-five safety by Pro Football Focus in 2012, but numbers are deceiving and Mikell’s cap number was a fat $9 million — so the move saves the team $3 million in cap space immediately.

Mikell played OK in two seasons with the Rams. He finished 2012 with 101 tackles, helping mainly in the box to stuff rushing attacks. Mikell had three sacks and four forced fumbles, but none were recovered. His pass defense was abysmal because at 33 years old, speed becomes a deficiency.

The move leaves two glaring holes at both safety spots, and perhaps a hint towards April’s Draft plans with two first-round picks.

A free agent to watch is Louis Delmas…who developed under new defensive coordinator Tim Walton in Detroit. Delmas is a big hitter, but injuries and pass defense has hurt his stock. 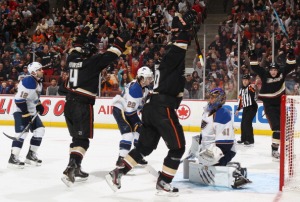 Without trying to hurt anyone’s feelings, the St. Louis Blues are what their record says they are. At 13-10-2, the Blues are flat-out inconsistent. Dice it up any way you want, they need to finish games.

These quotes sum it all up.

“We’re staying positive when we get down in games. We find a way to win.”

“We ran out of gas, we lost our energy. We made a soft play and they shoved it down our throats.”

“When we get a 2-1 lead in the third, we expect to win. And when we don’t, these are the ones we shake our head at. I don’t think fatigue or playing yesterday is an excuse. I think if anything, we were more ready for this game than usual.

“We got a one-goal lead in the third on a power play. Those are the times when you buckle down, and you can’t take your foot off the gas.”

The Blues took 7 penalties in the 4-2 loss…and the Ducks scored a short-handed goal.

What more is there to say? Not good enough.

HOLD ONTO YOUR HAIR PIECE