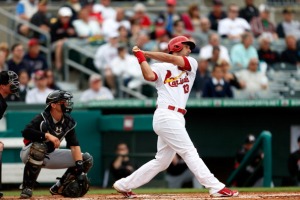 The Marlins beat the Cardinals 6-0 Sunday; marking the fourth time in a week the offense had been shutout. It’s still spring training — but it does bring back memories from 2012. Despite scoring the 5th most runs, had the 2nd most hits, and 5th most RBI, the offense held a fraudulent price tag.

It was feast or famine. Remember those pesky one-run ballgames? They went 21-26 during the regular season.

On another note, It seems the Cardinals struck gold with their 2012 first round pick, Michael Wacha. Wacha struck out 15 and didn’t allow an earned run in 11.2 spring innings. He will likely start the season at Memphis. Last year he struck out 40 batters in 21 minor league innings out of relief. Seen his stuff?

The World Baseball Classic became a bummer for the USA, but it’s great for baseball. This tournament shows baseball’s global development.

The Rams have invested too much stock into the offensive line the last decade. Jacob Bell, Jason Brown, John Greco, Richie Incognito, Alex Barron, Mark Setterstrom, Claude Terrell, and to some degree Harvey Dahl and Scott Wells have ALL been disappointments.

They desperately need a break with Jake Long.

The Note swept a 3-game home stand with Saturday’s 2-1 victory over a damn good Anaheim team. I believe the Ducks are better than Chicago regardless of records. They’re physical, resilient, and have two strong netminders in Jonas Hiller and Viktor Fasth.

Anaheim threw the kitchen sink and Jake Allen kept coming up with huge saves — the type this team got from Brian Elliott and Jaroslav Halak last season. This kid saved the season, and he’s done riding the bus:

KrisRussell is finding his groove. After a slow start, Russell’s speed is back and it creates a dynamic pairing with RomanPolak’s physicality. His 2nd period power play goal tied the game 1-1 and helped overcome a 3-for-39 PP stretch.

I wrote last week how Chris Stewart and Alexander Steen had the best shots outside the high percentage areas … but I forgot about the long-lost Vladimir Tarasenko. The ‘Tank Show’ came back after missing 10 games with a concussion playing just over 13 minutes and led the team with 4 shots — all quality scoring chances. Folks, this kid has star potential.