As much as I want to rant and complain, I realize that Albert Pujols is gone, so what is the point in getting upset? Lance Berkman said straight up last season that negotiations always come down to the money. The theory rings true again.
Pujols took the money and went west. The Los Angeles Angels are a solid ball club. Mike Scioscia is a great manager, and after signing C.J. Wilson, the rotation is loaded. 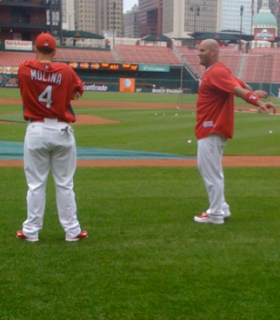 Pujols is 32 years old, and his 10-year, $250 million contract has him playing into his forties. The Angels already have an aging Vernon Wells, Torii Hunter, and Bobby Abreu. Somebody might want to send some depends to those Halos.

For St. Louis there is a sense of betrayal. But in reality, what the hell did Albert owe us? He gave us two World Championships. Ultimately, his .328 career average, 445 homeruns, 1,329 runs batted in, 1,291 runs scored, and 84 stolen bags will be missed.

Pujols will never be on top…Forget the “El Hombre” Pujols’ legacy will never be that of Musial. Musial contributed 22 seasons of greatness, while Pujols offered 11. Will Pujols’ number be retired?

Time for John Mozeliak to be creative… Mozeliak is under the spotlight. He will be held accountable to replace the offensive production that Pujols’ void creates. Replacing a .300 hitter is not easy. Mozeliak should look for considerable upgrades in center field, shortstop, and the rotation.

Carlos Beltran is intriguing…Beltran batted .300 with 22 homeruns and drove in 84 runs in 2011. He is represented by Dan Lozano…the same agent as Albert. He will not be cheap.

Tyler Greene doesn’t sound too hot to be the everyday shortstop. Frankly, the team needs to add a legitimate shortstop. The Cardinals have lacked a premier shortstop since Eckstein. Again, Mozeliak will need to be creative. Trades seem to be a better route at this point.

The strangest part about all of this will be watching Pujols in an Angels uniform. Replace the birds on the bat with a Halos logo in sunny California. The Rangers (AL West) will have a larger dose of Pujols. I expect his homerun tallies to increase playing in warm weather for the majority of his games.