The Scottrade Center will be rockin’ tonight when the Vancouver Canucks (27-14-3) visit for a Western Conference showdown.

St. Louis (25-12-5), with a win, could end the night tied for first place in the Western Conference. The last time the Blues were in first place in their division at the midpoint of the season was 2001. It’s a huge game for the Blues to defend their league leading 17-3-2 home record. Nobody has forgotten about the four-game sweep delivered from the Canucks in the 2008-2009 playoffs. Expect a feisty battle tonight.

Briant Elliott will be in the net for the Note. Elliott is 2-0 in two games vs. Vancouver this season. He notched a shutout in Vancouver on October 26th. Since November 4th, Vancouver has gone 21-7-2.

Per Jeremy Rutherford, the Blues will be without Barrett Jackman tonight. PK Subban leveled Jackman Tuesday in Montreal and will not play.

How long is Jeff Fisher going to take? Sources say he is flip-flopping between the Rams and Dolphins. He has Brett Favre Syndrome (BFS). Stan Kroenke is permitting Fisher to think twice about his decision. I don’t understand this. If Kroenke is dead set on Fisher as “the guy” then make an offer Fisher can’t refuse. Leaders like Steven Jackson, Chris Long, James Laurinaitis, and Sam Bradford might have another B.F.S. syndrome if Fisher keeps delaying his decision. Stat: Chris Paul and Blake Griffin combined to score 30 points on 12-for-21 shooting in the 1st half… The rest of the team struggled, shooting 4-for-22 (13 points).

Stat: The Heat have the NBA’s 2nd lowest FG % with less than 24 seconds and the score within 3 points. LaChoke.
Enjoy these beauties:

NCAA A-10
The Billikens lost another conference game to Temple last night at the Chaifetz Arena. The Bills, who started 11-1, have now dropped three of their last four games. The Billikens struggled during key stretches when the game was at stake. They have a tough schedule ahead starting Saturday at Charlotte. 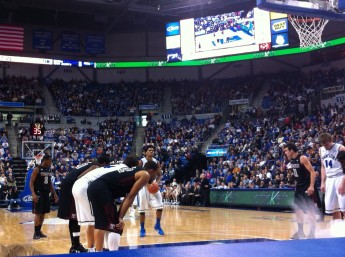