This weekend, the UFC returns to Brazil for some featherweight championship action and a host of other competitive fights on Saturday, January 14 in Rio de Janiero, Brazil.

Fighting for the featherweight belt we’ve got current champ, José Aldo, putting his belt on the line against undefeated 11-0 Chad “Money” Mendes. This will be a clash of opposing styles, with Aldo bringing his phenomenal striking against Mendes’ superior wrestling background.

On the preliminary card, live on FX, we’ll see Gabriel Gonzaga returning for the first time since his release from the UFC in October of 2010 following a loss to Brendan Schaub. He’ll be facing Brazilian heavyweight Ednaldo Oliveira, who makes his octagon debut in the UFC. We’ll also see slugger Sam Stout vs. Thiago Tavares, Mike Pyle vs replacement Ricardo Funch, and Yuri Alcantara vs Michihiro Omigawa. 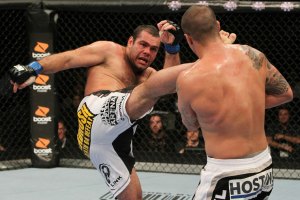 Gabriel Gonzaga (left) vs Brendan Schaub before his release from the UFC.

This card will definitely bring action, but it isn’t the most exciting card around. Taking a look at the preliminary card, I think Sam Stout vs Thiago Tavares should be good. Stout will try to impose his will on the feet, while Tavares will try to utilize his strong Brazilian Jiu-Jitsu (BJJ) background to earn a submission victory. Terry Etim vs. Edson Barboza is another solid fight. I think with a win over Etim, Barboza should solidify his spot “in the mix” for the lightweight title. Maybe Gonzaga strikes back with a vengeance in his return? Doubtful, but I’ll be interested to see what happens.

I think the most action-packed fight on the card will definitely be Belfort vs. Johnson, two sluggers who like to stand in the middle of the octagon and go toe-to-toe. Johnson will be making his Middleweight début fighting at a much more comfortable weight so his conditioning should be great. This has “Fight of the Night” written all over it.

Last minute update–Johnson shows up 11 POUNDS overweight for weigh-ins! Supposedly he’s ill, but that’s unacceptable. Dana White, president of the UFC, has already publicly stated that win or lose, Johnson’s job is on the line.

With that in mind, I think Johnson is going to be in the wrong place mentally. Belfort for the win.

Aldo vs Mendes? Ehh, could bring fireworks. The only way this could happen is if Mendes decides to get stubborn and try to beat Aldo at his own game by striking with him the entire time, but I don’t see that happening.

Aldo brings a strong Muay Thai background with a black belt in BJJ under the Nogueira Brothers, so he won’t be in foreign territory when the fight goes to the ground.

We saw in the Hominick vs Aldo fight how Hominick was able to score some key takedowns throughout the fight but Aldo was able to recover.

In all of Mendes’ fights we see a little striking until he shoots, and the rest of the fight is on the mat. He’s gotten a lot of criticism for being a boring “lay-and-pray” fighter in the many decision victories he’s scored so we’ll see if he puts an end to that Saturday night.

Taking all this into consideration, here are my predictions for the Main Card:

For my hardcore MMA fans out there, look for some great technical matchups between some talented, seasoned fighters. For those looking for crazy knockouts and wild endings, don’t hold your breath.

Until next time, thanks for visiting and stay tuned for my next weekly post on DailyGrindSports.com

Also in the next week, be on the look out for my own official MMA site! Still under construction, will be available soon!

3 responses to “In the Corner with Luke Foster: Taking a look at UFC 142”