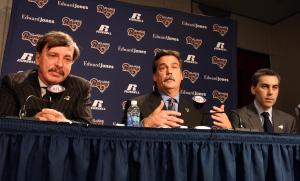 The theme at Rams Park Tuesday was winning. Getting the St. Louis Rams, 15-65 in their last 5 seasons, back on track. Jeff Fisher’s track record speaks for itself. He enters his 31st NFL season in 2012 with a career record of 142-120. “It’s another opportunity to make another trip as champions to the White House. It was that vision that made my decision very easy.”

Rams owner Stan Kroenke, in a rare appearance, officially stamped his name on the organization. “Jeff was absolutely what we were looking for.” Kroenke noted that 2012 would be his 20th year in sports business and, “The module (for success) at its center is an experienced, confident head coach who has dealt, and seen most things the world of sports can throw at him.”

Forget any power mongering lunatics. In fact, when asked about who has last say, Fisher deferred the question, “I’m not going into who has final say. Our philosophy is that decisions have to be made together. It’s a collective effort.” Woah, now Fisher “won’t go there?” Come on now Spags.

Forget any flashy “four-pillars” philosophy. Fisher stood at the podium as a seasoned veteran knowing what it takes to win in the NFL. “Philosophy is pretty simple: do whatever it takes to win a football game. We’re going to run the football, protect the quarterback, play good defense, and get the ball back.” Fisher and Kroenke mean business. Kroenke’s commitment to winning was imperative in landing Fisher. 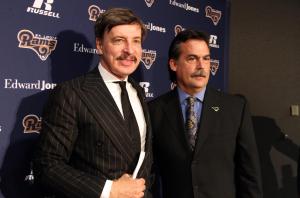 Fisher and Kroenke (Photo via williamgreenblattphotography.com)

No song and pony dance for a first-time head coach, no need to find an encyclopedia to find out who the hell he’s naming for assistant coaches.

“My efforts are to put together the best possible coaching staff for this team. I have, over the years found that patience in terms of hiring coaches is better than haste. Finding good coaches takes time.”

Notice how he said “coaches”, not “buddies”. Fisher has pull with big-time assistants, something neither Steve Spagnuolo nor Scott Linehan had. They were just giddy to have a HC position. They hired inexperienced “guys” into key positions.

Did you know? Fisher was the defensive coordinator for the Los Angeles Rams in 1991.

Fisher likes the makeup of the current St. Louis Rams. “It’s a talented team that has some holes, and I look forward to filling those voids.” More importantly, he likes what he sees from quarterback Sam Bradford. “This year was difficult. I think you have to look at his success from the first year. 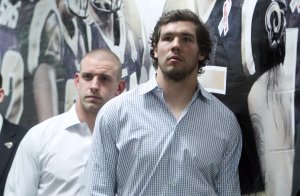 Sam Bradford and James Laurinaitis watch as Fisher is introduced (Image via williamgreenblattphotography.com)

The lockout, lack of time together in the offense, but he has a chance to be a top QB in the National Football League very soon.”

Watching a poised Fisher address the media, he seems destined to succeed. The Rams have a proven leader at the top with a keen eye for talent and a special way of motivating players. Competing won’t cut it for Fisher. He demands winning. He demands self-discipline and expects a certain level of play in the National Football League. As Fisher puts it, “we have a great opportunity to get a team in a short period of time back on track”

On Stan Kroenke’s commitment to winning

On Reports he chose Miami over St. Louis

On Never wanting a season like 2011 Again; lockout implications

On his impressions of Jeff Fisher