Eli Manning is a Super Bowl MVP. Tom Coughlin has 142 regular season wins, third most of any active coach. Together they have pulled off incredible feats. The fun is just beginning for the G-men. 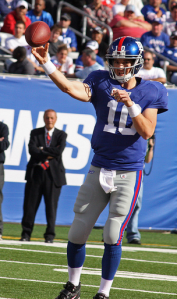 New York Giants head coach Tom Coughlin and quarterback Eli Manning have teamed up for two of the biggest upsets in NFL playoff history.  The first came against the undefeated (18-0) New England Patriots in Super Bowl XLII and the most recent was last weekend’s Divisional Round Playoffs 37-20 upset of the 15-1 Green Bay Packers.  Both opponents had high-powered juggernaut offenses. In both games, the Giants got tremendous push from the front four, slowing down Aaron Rodgers and Tom Brady. But it has been Eli Manning’s clutch quarterback play that has vaulted them over the top, into victory.

The similarities between the 2007 Giants and this season’s Giants are astonishing.

The 2007 the Giants had a 10-6 record, earning a wild-card berth.  This year the Giants went 9-7, winning the NFC East in Week 17 against the Dallas Cowboys.  Both included slow starts that led to impressive playoff runs.

In 2007 the Giants won three road playoff games before defeating the Patriots in Super Bowl XLII. One of those road victories came in the NFC Championship Game against the Green Bay Packers, led by Brett Favre.  They took down the reigning Super Bowl Champion Green Bay Packers last weekend at Lambeau Field and play next weekend at Candlestick Park in San Francisco.  They are true road warriors. 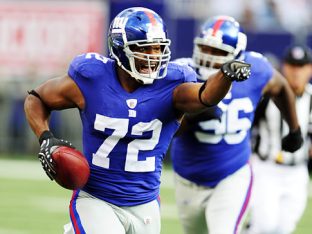 Giants defensive end Osi Umenyiora has been a vital component to the Giants success.  In Super Bowl XLII against the Patriots, Umenyiora recovered a fumble forced by Justin Tuck.  Last Sunday Umenyiora forced a fumble from the hands of Aaron Rodgers.

He’s recorded five sacks, one forced fumble, and one fumble recovery in his playoff career.

Tom Coughlin instills his own personality into his football teams.  After the Giants faced criticism for stumbling down the stretch in 2007 he told his players, “We had a 10-6 season. A ten win season in the NFL. That’s not an easy thing to do.  They can line up and kiss my ass.”

As recent as 2011, Coughlin has been rumored to be on the hot seat, but his players love playing for him. “Our coach has always been consistent in his message,” said Giants defensive tackle Chris Canty.  He holds his players accountable, but more importantly he holds himself accountable. 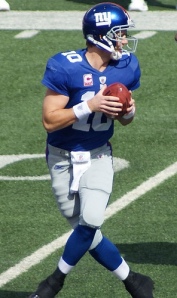 Nobody can deny Eli’s big game ability.  After winning MVP of Super Bowl XLII, Manning has continued his stellar play in clutch situations.  Prior to the 2011 season, Eli called himself an elite quarterback.  This season Eli broke Johnny Unitas and his brother Peyton’s record for most fourth quarter touchdown passes in one season with 15.

Despite the Giants 32nd ranked (89.2 ypg) rushing attack, Eli had a career year: Completing 61% of his passes while throwing for 4,933 yards and 29 touchdowns.

Last Sunday he sent the Packers packing.  Eli outperformed probable NFL MVP Aaron Rodgers, completing 21-33 passes for 330 yards with 3 touchdowns. He had three 3rd down completions of 8, 10 and 11 yards in the first quarter alone.

Who can forget the 37 yard touchdown pass to Hakeem Nicks as time expired in the first half against the Packers on Sunday?

The Giants have set themselves up for yet another improbable run at a Super Bowl title.  They face a tough task this Sunday in the NFC Championship game against Jim Harbaugh and the 49ers.  A win in Candlestick Park won’t come easy.

But these Giants aren’t done, yet.

4 responses to “Manning, Giants Do It Again”