As if Tom Brady wasn’t good enough, the New England Patriots drafted him Hercules to throw to. Brady is the smartest quarterback in the league, but you’d be nuts not to throw it in this monsters direction.

Just like Hercules, Rob Gronkowski hails from a family of great accomplishments and expectations. His father was a starting guard at Syracuse for 3 years. His great grandfather was an Olympic cyclist. Rob’s two older brothers were both drafted into the NFL before him. Now, at 22 years old, Rob Gronkowski is the best tight end in the league.

In high school he was an all-American tight end, and recorded 73 tackles and 6 sacks on defense. He was also the starting center for his basketball team.

He was heavily recruited by different schools in all major conferences, but ultimately chose University of Arizona. His freshmen year he led the team in yards per reception (19), and set a school record for receiving yards by a tight end, only to be broken by himself the next season. In only 23 games, he wrote the school’s record book for TE. Career records for receptions (75), yards (1,197) and touchdowns (16). Get the picture? He signed the record book on his way out. A back injury forced Gronk to miss the entire 2009 season for the Wildcats. It did not hurt his stock. 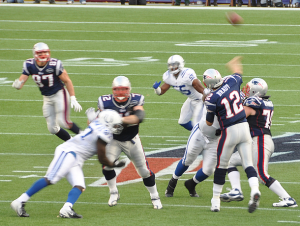 best athletes in the league.

Is this guy a freak, or a beast? Hercules was drafted 42nd overall by the Patriots (Patriots drafted counter part Aaron Hernandez 113th overall). The only TE that went before him was Jermaine Gresham. Gronk signed a 4 year deal worth $4.4 million, with a $1.76 million signing bonus, quite a steal.

In his first preseason, he showed Patriots fans what they can expect from him. Sheer beast mode, wow.

After 3 straight preseason games with a TD, he scored his first NFL TD in Week 1. His rookie season totals: 42 receptions, 546 yards, 10 TDs.  His best game of the year was a 3 TD game at Pittsburgh.

It didn’t take Gronk to long to improve his numbers either. He equaled his TD total from his rookie season in week 11, including this gem, and this career long, giving him 20 career TDs, the most ever by a TE in first 2 seasons.

The season wasn’t even over. In week 13 he scored 3 TDs, one rushing, while setting the single season record for TDs by a TE.

He ended the season with an NFL TE record 1,327 receiving yards, and 18 TDs. He became the first TE to lead the NFL in TD receptions.

To put it in perspective, Rob Gronkowski scored as many TDs as the St. Louis Rams.

In the postseason, Gronk wasted no time in his pursuit of NFL records, tying the NFL record for TD receptions in a playoff game with 3, part of a 10 catch 145 yard night.

Shannon Sharpe revolutionized the TE position. Gronk has taken it to another level. New England lines him up outside, in the slot, and in the backfield. No player in the league can match his strength and athleticism. He is a nightmare for opposing defenses. Double-coverage? Gronk wins.

All his life he wanted to spike a football in the end zone. Now in the NFL, he does, a lot. When Tedy Bruschi asked Rob why he spiked it, Gronk replied, “Get out of my way.”

Thanks for reading. Check back later for more Gronkowski in Tight End Impact.

One response to “Get Gronk’d”