Chach is preparing for a huge game in Austin, Texas so hopefully we don’t pull a Jayhawk, or a Billiken, or a UConn. Big week ahead for the Missouri Tigers. The Racers stay undefeated. Down 4…1 Minute left….Loud as HELL…It’s the Full Court Press. 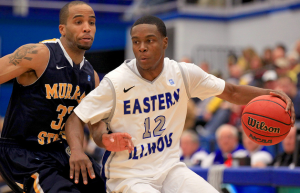 Unbeaten: #9 Murray State (21-0, 9-0) keeps on winning. They took care of SIUE a week ago, and Tony Romo’s alma mater, Eastern Illinois on Saturday.  As Chach pointed out on a previous FCP, Murray State has had a relatively easy schedule. They shoot 48% from the field as a team and average only 33 rebounds a game. But, undefeated is undefeated, and we will always honor a goose egg in the loss column.

Panic Meter: Connecticut is out of the top 25 for the first time in 28 weeks. They have lost 3 straight including two home games. Sunday’s loss to Notre Dame spoiled the return of freshman guard Ryan Boatright, who missed the last three games amid a NCAA investigation.

Panic Meter II: The #6 Baylor Bears won at home against Texas, but it wasn’t pretty. Baylor has a tough road ahead. They play three of their next four on the road, with the lone home game against Kansas.

Honorable mention: #2 Syracuse without Fab Melo, who could be out “for a while”.

Brad Beal has 19 points in a win over Mississippi State

On the Rise: The #11 Florida Gators are 5-1 in the SEC. They play South Carolina (9-11, 1-5) Thursday, Vanderbilt (16-5,5-1) next Saturday before facing #1 overall Kentucky in Lexington. Brad Beal is hitting his stride. Beal scored 19 points against Mississippi State including a clutch three-pointer to begin a 11-0 run in the second half. The Gators have some serious potential.

With Sunday’s win over Michigan, The Ohio State Buckeyes sit a top the Big 10 standings and rank #3 overall at 19-3.

Court Stormers: Iowa State handed #8 Kansas their first Big 12 loss of the season. For the first time since 2006, Iowa State knocked off a ranked opponent in Hilton Coliseum. Royce White was spectacular for the Cyclones scoring 18 points with nine rebounds. KU (48%) actually shot a higher FGP than ISU (44%), but Kansas’ 23 fouls equated to 25 free points. And of course, they rushed the court at the buzzer. 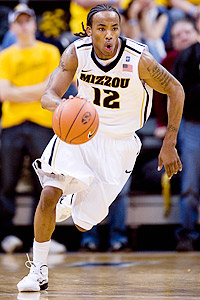 Missouri had long stretches of bricks–a span of 7 minutes in the second half without a bucket (not including free throws). Marcus Denmon was 4-15 shooting despite his 19 points. Missouri has a tough test ahead at Texas tonight before the Jayhawks visit Columbia on Saturday.

Rumors have it Chach is behind a video gone viral in Columbia … We’ll have updates live from Texas Monday night.