McIlroy Edged Out by Mahan for the Match Play VictoryHunter Mahan relied on a strong front nine to bring home the victory in the Accenture Match Play Championship on Sunday over youngster Rory McIlroy.

Rory McIlroy congratulates Hunter Mahan after his victory in the Accenture Match Play Championship on Sunday.

The victory was largely in part to a three-hole winning streak, which began for Mahan in the form of a birdie on the sixth, besting McIlroy’s par.  On the seventh, both players stumbled, but Mahan’s bogey was enough to win the hole after McIlroy’s double bogey.

Mahan then coasted on a two hole advantage on much of the back nine, which McIlroy was unable to overcome.  The American’s fourth career PGA victory demonstrated his experienced consistency and determination to keep the talented McIlroy off the lead.

But McIlroy has positives to take away from the tournament.  Four back on the par five twelfth and quickly seeing his hopes of a number one world ranking fading, McIlroy left his second shot a yard off of the green and then chipped in for an eagle and his first win of the day, cutting the lead to three.

And while he ended the tournament two strokes back and in second place, McIlroy made a statement: last year was no fluke and the young Irishman is a serious competitor for the top spot in world rankings.

By his own admission, McIlroy’s most important round was played on Saturday, when he faced Lee Westwood, another top golfer in the world.  Said McIlroy, “No disrespect to the other two guys in the semifinals, Hunter and Mark, but … to me, it was like my final in a way.”

England’s Luke Donald maintains his #1 ranking, however without a victory in the coming weeks—or at the very least a strong

showing—McIlroy could likely capture that title with continued success.Donald lost in the first round at Dove Mountain.

What did we learn?

McIlroy was his own biggest enemy on Sunday.  Granted Saturday’s match was huge, but a victory on Sunday would have been a significant milestone in making the case for a number one ranking. 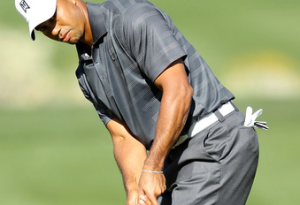 Regardless, the PGA season has only just begun and the months ahead will offer more tangible opportunities to lay claim to the top spot.  Don’t expect McIlroy to go away any time soon.

Tiger Woods is not back to his former self.  Though his play in 2012 has improved, his loss to Nick Watney in the second round last weekend once again demonstrated his inconsistent putting and lack of “Tiger”.  He missed three birdie putts within 10 feet over the last six holes. His 5-foot miss on 18 could have forced a playoff against Watney.