I got a text message today reading, “I really like the Sharks +140 to win the series”. Uh, no.

Forget the 4-4-4 finish, this team earned 109 points for a reason. They beat the Sharks four times this season for a reason. They’re a good hockey club. Do they lack a premier scorer? Absolutely. But don’t forget the power of rock solid goaltending and players committed to defense.

With that being said, if the Blues take dumb penalties (like they have been, even against Dallas), put this one in the books. The Sharks own the NHL’s 2nd best PP %, scoring on 21% of their chances. Yeah, the Blues improved under Hitchcock on the PP, but it’s still a glaring weakness. 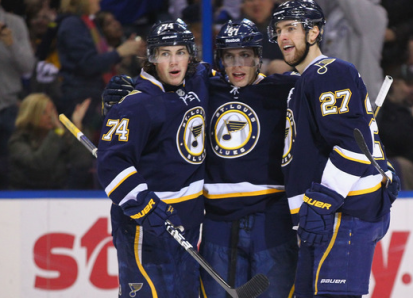 The Blues PP has success when shots from the point get through traffic. And lately, they haven’t. Defensemen had just 2 goals during the 4-4-4 slide to end the season. Kevin Shattenkirk and Alex Pietrangelo are imperative to a successful PP. The PP at its peak included shots from the blue line deflecting off David Backes and Jason Arnott. Speaking of Arnott, he is scoreless on the PP since 2/27.

Somebody has to get a hot hand. If it’s Petro, the Blues become the most dangerous team in the NHL.

Who will Hitch dress?

Where do Ryan Reaves, BJ Crombeen, Chris Porter, and Scott Nichol find ice time? They might not help in the scoring department, but the playoffs are certainly more conducive to their aggressive style than say Matt D’Agostini or, ahem, Chris Stewart.

We’re talking about a proven winner. A guy who knows a ton more hockey than I could ever imagine. Trust him to find the right combinations, push the right buttons, and put the Blues in the best position to win each night.

The Blues have to believe in the system. Aggressive on the end boards, relentless fore-check, and a determination to get back on defense. The “200-foot game” if you will.

The Blues finished 30-6-5 at the Scottrade in 2011-2012. However, the place seemed to get quieter as the season went on, as if fans expected to leave with a W. Remember that you’re a huge factor in the momentum swings. A raging crowd is imperative. Get loud, get rowdy. This is playoff hockey.

I’m biased, but I’m not naïve enough to pick against the Blues. Their disciplined style of hockey gives San Jose fits. They have the goaltending edge, the home ice, and the better coach. The Sharks present danger, but not enough to knock off the 2nd best team in the Western Conference.