Another day, another dollar. Bringing you quality betting info, trends, lines, and more for free.

Today is a special day. This Friday the 3rd of August there are 16 games of Major League Baseball. That’s right. No team is off, and two of them play twice. In honor of this day, the Daily Grind is giving you free MLB picks. Oh wait, that’s all we do.

Have you heard about this Josh Hamilton mystery?

Supposedly there is something contributing to his slump that he is withholding from the media. Read about it here. Manager Ron Washington says it’s not an injury and I certainly hope it’s not drugs again, but what else could it really be? Either way, he’s tossing money out the window as his contract expires after this year.

Back to the basics.

Every single one of these games has been priced exactly how I would see it so I’m going to have to do a couple parlays. It’s cool, parlays are more fun anyways.

The Reds have won 13 of their last 14 games, improving to a MLB-best 64-41. They faced horrible teams, but this kind of momentum cannot be discounted. Latos is 9-1 since 4th start of the season in April and the Cincinnati offense flourishes at the Good American Ballpark (just a little jab).

The Cards return from a 6-game road trip that included the highs and lows of a typical Cardinal season. The Cards have the largest run differential in the bigs and leave the most runners on base per game. That tells you how many times they get on base. For the first year since I can remember, the Birds are also hitting lefties very well this year (AVG .282).

Vogelsong has given San Fran 16 straight quality starts. He looks for number 17 tonight in Colorado. Even if he doesn’t get the QS, I will personally guarantee that his opponent does NOT.

Jonathan Sanchez is what I like to call an “embarrassingly terrible” pitcher. He was pretty good with Kansas City this year, (1-6) 7.76 ERA compared to his (0-2) 11.88 ERA with Colorado. What do u do with a bad pitcher? Send him to Colorado to get worse….poor guy.

The Phillies have done a bad thing. They have given that city hope that maybe they could turn things around in time to make the playoffs. There just isn’t enough playoff spots for them. Joe Blanton has served up 22 homers this year (3rd most in MLB), but he’s also given up the least walks in the league. Dude throws strikes.

CC’s last outing against Boston was his worst of the year giving up 6 earned over 6 IP, but he will be able to rebound against Seattle. The Mariners actually score the 3rd most runs in the league on the road and the Yankees score the 3rd most runs overall. Of the last 7 games that Millwood has started, the Mariners have lost 6 times, including a 4-1 loss to the Yankees. 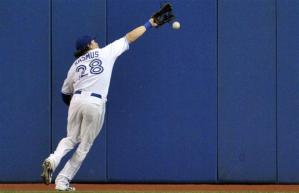 Toronto is avergaing the 2nd most HR/game thanks to Encarnacion, Joey Bats, and…Colby Rasmus? Yup. The Oakland As are starting Dan Straily and it is his first Major League start. It could go one of two ways: he goes 6, gives up 2 earned runs and strikes out 5 OR he goes 3, gives up 3 bombs and walks 4. Either way, Brett Cecil couldn’t keep a blind toddler off the scoreboard.

That about wraps it up today. This one’s for you Pete.

Owen’s Play – Well I am getting my butt kicked here, and embarrassed by a red hot Chach, but here is an easy winner. Olympic Women’s Basketball – USA -29 > Czech Republic parlay with the over at 152. Now you can watch the game and cheer even after the team goes up by 20.

Thanks for reading Grinders.