The biggest crowd Greg Zuerlein ever kicked in front of was just over 20,000 during his collegiate career. A Division II player at Missouri Western State, Zuerlein transferred for his final season from a program at the same level, Nebraska-Omaha, which dropped its football program in 2011.

Part of the reason Zuerlein chose Western Missouri was because of their indoor facility. It meant he could kick all year long, crucial to pursuing his dream. He had several options, but none as lucrative or secure as the route he chose. “D-1 schools only offered me to walk on coming out of high school. I had to pay for my own college the whole way, I knew I wasn’t going to get any help from my parents, so I chose to take a scholarship over walking on.”

goals during the 2009 campaign. A medical redshirt in 2010 wouldn’t slow him down. He gained national recognition last fall after transferring to Missouri Western, where he kicked an NCAA record 21 straight field goals and showed range to nearly 60 yards out.

Zuerlein confidently says, “I expect to make every single kick, and if I don’t, I’m disappointed because I know I have the ability to make them.” The longest successful field goal he can remember is a 74-yarder with about “60 MPH of wind behind me,” he says laughing.

Drafted in the 6th round, Zuerlein is quickly becoming a fan favorite in St. Louis. When the Rams hired Jeff Fisher as head coach, he immediately instructed special teams coordinator John Fassel to find the best available kicker in the draft. The Rams had cut ties with the disappointing Josh Brown, who in 2008 signed a record 5-year deal making him the highest paid kicker ever.

Fassel privately worked out Zuerlein, and was blown away with his leg strength. “A 25-yard field goal to him is the same as a 60-yard field goal. Every kick is the same. He doesn’t tender foot the short ones, and he doesn’t try to kill the long ones.”

Fassel has worked with some successful kickers in the NFL. In Baltimore, Fassel coached Matt Stover, the NFL’s 5th all-time leading scorer, and a two-time World Champion. Fassel also worked with Sebastion Janikowski in Oakland, who tied the NFL record for the longest field goal at 63-yards last season. He believes Zuerlein has a chance to uproot both, especially considering his success at a young age. “It’s exciting to coach,” says Fassel. “Greg has great potential. So far he has produced and if he can keep that up, the sky’s the limit.”

So far, the limit has been 60-yards for Zuerlein. However, expect that number to get deeper. “He could set an NFL record if the conditions are right,” says Fassel. The conditions are perfect inside the temperature controlled Edward Jones Dome. 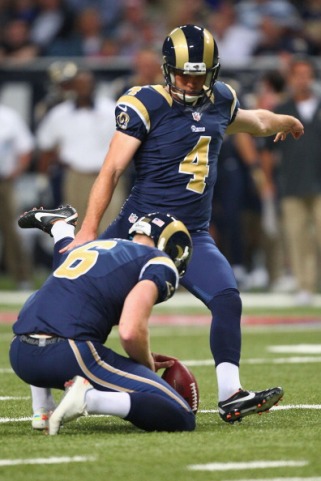 Zuerlein is quickly gaining recognition among NFL fans. He is owned by 21.5% in ESPN fantasy leagues, a number less than 1% before Week 1. So far, Zuerlein is a perfect 12/12 with his only scare getting reimbursed as Washington tried to “ice” him, and on the second try, count it.  He knocked a 56-yarder at Chicago despite swirly winds at Soldier Field. Then, on Sunday he set a St. Louis Rams record with a 58-yard bomb only to break it with a 60-yarder on the first drive of the 2nd half. He became the first kicker in NFL history to make two field goals in one game from beyond 55 yards.

The calm, cool Fisher gives no leeway to his rookie kicker. “Yeah, I expect him to make those kicks. I was on the headsets and I said, ‘Field goal,’ and somebody said ‘Field goal?’ I said, ‘Yeah, it’s only 60. It’s well within his range.'”  Zuerlein’s leg is a weapon in Fisher’s arsenal. “Yes, I have not doubted him once so ever. From the first day he came on the field, he expects to make it. He has great confidence in his leg. The other thing that’s important to realize is we have a really fine snapper and holder and it takes three to put these things down and to put them together. So, it was good.”

He’s currently 4th in the NFL in scoring with 41 points. For an offense struggling to score touchdowns inside the red zone, or for that matter the 50-yard line, expect plenty of work for Greg Zuerlein’s right leg. “Right now, our kicker is the MVP of the season,” Steven Jackson said. “Pretty much, all we’ve got to do is get across the 50-yard line and we’re in his range.”

Thursday night he will kick in front of a national audience in prime time, but he won’t be thinking about that, “It’s going to feel the same, just another game.” Sure, just another game with another chance to revisit the record books for rookie Greg Zuerlein. “When the coach has confidence in you, it gives you more confidence in yourself,” Zuerlein said. “I love it when they give me those chances.”