It’s Thursday Night under the bright lights. St. Louis looks to get above .500 for the first time since 2006 and 3-0 at the Edward Jones Dome under Jeff Fisher. 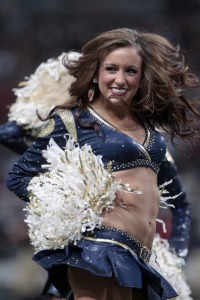 Don’t let “Peterson Island” beat you. We know Johnny Hekker can throw touchdowns, but can he directionally punt? He did OK Week 2 against Devin Hester, but here comes Patrick Peterson. Move over, Revis Island. Peterson absolutely killed St. Louis in 2011, his rookie season. In Week 9, he picked off a Sam Bradford flea flicker, and returned a game winning, 99-yard punt for a touchdown in overtime. Three weeks later he did it again, this time 80 yards, and tied an NFL record with his fourth punt return of the season. How about not giving him a chance to touch the football? Sound good? Great.

Make a game winning play. Since 2009, the Rams have just one win against Arizona. But, four of the five AZ wins have been decided by one score or less. I went back and looked at highlights from those six games, and they all have a strange twist. Like 2010, when AZ wide receiver Steve Breaston improbably chased down a Ram returning a fumble for a sure touchdown and caused a fumble himself that the Cards recovered. Blocked punts, blocked field goals, and special team touchdowns. Just bizarre game changing plays, mostly in favor of Arizona. Thursday will come down to the 4th quarter, I guarantee it.

The less you hear Brad Nessler say Sam Acho’s name, the better. Ditto with Calais Campbell, Adrian Wilson, and Darnell Dockett. Acho dominated the Rams last season with three sacks and a fumble recovery. Campbell at 6”8 is notorious for blocking passes at the line of scrimmage. He has five career sacks against STL. Wilson is a Pro Bowl safety. Defensive Coordinator Ray Horton moves Wilson all over the field, disguising blitzes and quarterbacking the defense. Since 2001, Wilson has 7.5 sacks, 6 INT’s, and 3 forced fumbles against STL. Dockett has a hamstring injury, but is likely to play Thursday. He solidifies the defensive line with his physical interior play. 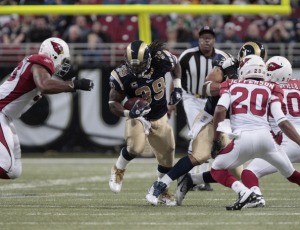 defenders were rushing on and off the field all day to adjust. The Rams regularly alternated all five active receivers (Amendola, Gibson, Quick, Givens, and Pettis), and used Darryl Richardson often as the change of pace running back. They kept the defense guessing. One, it wears them out, and two it creates opportunities for big plays by catching them off-guard.

#FillTheDome. Yes, I just used a twitter hashtag. The turnout last Sunday was pathetic and disappointing. Second home game of the season against a division rival and where are the fans? Hell, the self-proclaimed ‘BEST FANS IN BASEBALL’ can’t even show up to Cardinal games in a pennant race. I’m not talking about paid attendance, so save your Google searches number crunchers. I’m talking turnstile attendance…a la butts in the seat. The Rams have a serious dome advantage…it can get loud as hell in there.

Thursday Night is a chance for the Rams to prove their credibility on a national stage. They failed on Sunday Night Week 17 at Seattle in 2010 (play-in game), and failed last year in Week 2 on Monday Night against the Giants. This is a new era of Rams football, and its time to jump on board.

Chris Long has a message …