The NLCS continues in St. Louis for Game 3…Can the Cardinals offense get back on track?

The Cardinals are 5-3 in the postseason. In those three losses, the team has a combined four runs on 11 hits. It’s been feast or famine. In the five wins: 41 runs and 52 hits. It’s quite a drastic turn but nothing new. In the regular season, St. Louis was 12-55 when scoring three runs or less. 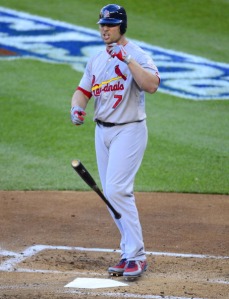 So what’s the problem?
1) Ryan Vogelsong was great Monday night. He painted every corner of the strike zone over seven strong innings. His pinpoint control jammed Cardinal bats all game. Tip the old cap.

2) Matt Holliday, Allen Craig, and Yadier Molina are a combined 4-22 (.181) in the NLCS. They have 0 RBI, and one run scored. They’re 0-for-8 with runners in scoring position. Craig is hitless in the last three games.  Holliday is hitting a robust .207 in the NLDS/NLCS. Molina has only 4 hits all postseason.

3) Jon Jay is not setting the table. He’s 5-33 (.151) in the postseason. Jay’s home/road splits are eye-popping, so a return to Busch Stadium hopefully lights some magic. He has a favorable matchup today against Matt Cain, who he is 4-for-6 against in his career.

Kyle Lohse needs to replicate his Game 4 NLDS start when he pitched seven innings of two-hit ball. He’s the only Cardinals starter to get past the 5th inning. Starters have gone three straight games without getting an out in the fifth inning. The Cardinals’ offensive explosion in their victories is pretty rare in the postseason. Usually these games are tight, low scoring affairs. Mike Matheny alluded to this yesterday.

Hunter Pence has great numbers against Lohse having faced him a lot with Houston. Pence is hitting a cool .295 in 44 at-bats. If Marco Scutaro (hip) can’t go, his replacement Ryan Theriot is hitting .545 against Lohse in 22 at-bats.

Murphy’s Law
St. Louis has just one run on five hits in the 14 innings since the four-run 4th in Game 1. Woah, that’s a lot of numbers. Apologies. But essentially, the Giants pitching has shut them down since Carlos Beltran hit a 2-run HR to make it 6-0. 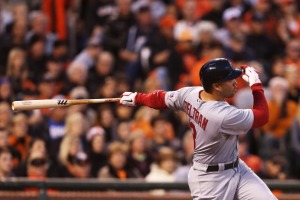 Finally, pitcher Jake Westbrook and first baseman Lance Berkman both participated in a simulated game Tuesday at Busch Stadium and both are encouraged that they might be available eight days from now for the start of the World Series.