Green Bay is coming off a big Sunday Night Football walloping over the Houston Texans on the road. At 3-3, thanks in part to a fraud touchdown call at Seattle, the Packers open a promising stretch against the Rams, Jacksonville, and Arizona. They sit behind both Chicago (4-1) and Minnesota (4-2) in the NFC North. 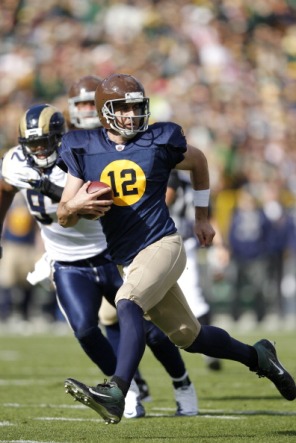 The Packers offense finally fired on all cylinders. Earlier in the week reports surfaced of lackadaisical practices, ‘refs out to get us’ esteem, and finger-pointing. QB Aaron Rodgers impressively canned all those distractions and threw six touchdowns, three of which went to Jordy Nelson, his favorite receiver a year ago who finished with 15 TD. Nelson had one going into the game.  Rodgers connected on touchdowns of 41, 6, 21, 1, 48 and 18 yards, and routinely found massive holes in the Texans’ secondary. WR James Jones said after the game he had never seen Rodgers so focused.

So here they come, the Green Bay Packers into the Edward Jones Dome, where Jeff Fisher is undefeated. The Rams enter Week 7 looking to rebound from a tough loss at Miami despite 462 yards of total offense.

QB Sam Bradford is 8-8 at the Ed, compared to 3-13 on the road. He’s thrown 19 of his 30 career touchdown passes on home turf. I’m not sure what the exact reasoning behind these splits are, and maybe its nothing, but the results are certainly telling. The offense seems more fluid at home.

The Pack’ present a good test for St. Louis. Can the Rams compete with a team like Green Bay? Last season, the Rams were embarrassed at Lambeau Field 24-3, and to add injury to insult, Bradford sustained the infamous ankle injury which eventually curtailed his 2011 campaign.

Get this, the Rams actually out gained GB 424-to-399 in total offense. They went 0-3 in the Red Zone. Josh Brown blew a 47-yard FG wide right after an opening 7-play, 56-yard drive. They were outscored 21-3 in the 2nd quarter. Sound familiar? Like identical to last Sunday at Miami? My god I can’t get over that one.

The Packers come into town a tad vulnerable on defense, even after shutting down the potent Texans offense. Their thin at linebacker, especially after losing D.J. Smith to a knee injury. Smith took the place of Desmond Bishop, whose on IR with a torn pectoral muscle. DT B.J. Raji sat out last week, as did WR Greg Jennings. Rodgers suffered a minor injury scrambling late in the game, and when asked if his name would be on the injury report, he answered, “Yeah, probably. Maybe. We’ll see.”

The Rams come into Sunday with the 7th ranked defense in the NFL. Green Bay ranks 14th, giving up 4.5 more PPG than the Rams. The Rams D has been stingy, evident by holding Miami’s rushing attack to 19 yards last week. They’re getting timely turnovers, stopping the run, and attacking the quarterback. If the offense could capitalize on their opportunities to finish drives, the Rams could easily be 5-1.

I don’t think its unfathomable whatsoever the Rams take this game. Granted GB is potentially hitting their stride, the Rams have a very good defense, and a secondary that can compete with the Packers’ receiving corps. Mike McCarthy is quick to pull the plug on the running game. They have yet to establish a true rushing threat, leading to an obvious one-dimensional passing attack.

With the NLCS day game, we’ll try to get sound from the Wednesday practice at Rams Park, and as always check back for the FIVE KEYS later in the week.