Three weeks ago the Rams played to a tie with the 49ers. Sunday, the battle continues at the Dome. There’s certainly unfinished business on both sides.

I have a feeling the San Francisco defense, ranked 2nd in the league, will want to prove their better than allowing 24 points to an offense only averaging 18.6 a game. They might even defer if they win the initial coin toss.

But the big news this week was Jim Harbaugh naming Colin Kaepernick the starting QB, but like most of what he says, it was pretty noncommittal:

Huh? Don’t be surprised i 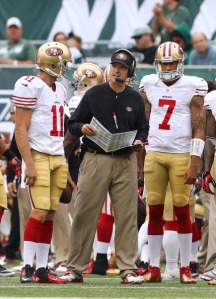 f Alex Smith enters the game at some point. Kaepernick has played well, and his legs pose a bigger threat to the Rams’ vulnerable linebackers and safeties than Smith, but he’s also due for a lull. The Rams have played against, and seen two weeks of film from Kaepernick so expect a solid game plan defensively. Then again, he did put 32 points up on the Bears defense…As Cortland Finnegan said, “we have our hands full”.

Aldon Smith has a league high 16.5 sacks, including two on Sam Bradford, and is on pace to break Michael Strahan’s single-season record of 22.5 set in 2001.

The Rams need to pound the football. Steven Jackson rushed for 101 yards in the tie, and is coming off his 139-yard performance in Arizona. Jackson is on fire, feed him the ball and don’t forget about Darryl Richardson.

The return of C Scott Wells made a big difference last week. His quickness opens the “second tier” running lanes for Jackson and gang. Wells has not practiced all week, but probably as a preempt unnecessary wear and tear on his knee.

He’s been in a walking boot all week, but if you want to tell me Danny Amendola won’t suit up Sunday, I’ll let you make that mistake.

Bradford had an interesting comment on rookie WR Chris Givens.

Enjoy some free entertainment provided by Janoris Jenkins. Paired with a quote about his progress as a rookie. How can you not root for this guy.

This game will come down to turnovers. If the Rams can build off their four interception day at Arizona, they have a shot. I’ll just say it; the Rams are so inept offensively that they have no room for error. It’s a problem and the draft is five months away.

The defense is still not forcing fumbles. Of the six they’ve popped loose, only ONE they recovered. The six overall is an absurdly low number, but they come in bunches so maybe this week. Worse, Robert Quinn (concussion) is looking like a “no-go”. Eugene Sims would take his place.

The Rams are getting seven points. Tough call, I thought they would get embarrassed their last meeting. Kaepernick is due for a hiccup, and the recipe of an inexperienced QB facing a defense twice in a four-week span seems dangerous.

Expect a fight, and a better showing than their last home game against the Jets.