Although I would have preferred to see Diaz duke it out with current champ Georges St. Pierre, you can’t always get your way with an injury-prone sport such as MMA. Condit vs Diaz headline an action-packed card.

The main card is as follows:

First, we’ve got Ed Herman taking on Clifford Starks. Herman is coming off two straight 1st round wins and Starks is coming off a win in his UFC debut.I expect Clifford Starks to take down Herman utilizing his wrestling skills to win the fight. Herman will be working subs while on his back.

My pick: Ed Herman via submission round 2

Next it’s Brazilian Renan Barão vs Scott Jorgensen. Barão is on an outstanding 27 fight win streak and with a win over Jorgensen, he will make his way closer to a shot at the UFC Gold. Jorgensen is no easy match though, a fighter who is now 2-0 in the UFC looking to get a shot at current title-holder Dominick Cruz as well. It’ll be a battle and I predict this will be “Fight of the Night.”

My pick: Renan Barão via decision 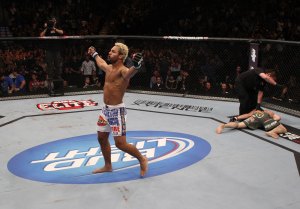 Koscheck in his most recent win over UFC Vet Matt Hughes

Next it’s the big mouth Josh Koscheck vs Mike Pierce. To be honest, I’m surprised these two are paired up. Pierce is a good wrestler but Koscheck’s wrestling will cancel that out. It will be a fight on the feet, and Pierce’s striking is no match for the improved Koscheck.

My pick: Josh Koscheck via TKO round 1

Then we’ve got two heavyweights: Roy “Big Country” Nelson vs Fabricio Werdum. Both fighters are extremely talented grapplers which I think will cancel each other out. Instead of taking it to the mat, Nelson will try to impose his will on the feet and work his stand-up. Nelson has better striking and can control the fight if he keeps it on the feet. As seen in the Werdum vs Fedor fight, a takedown could be disastrous for Nelson if he takes the fight that direction. Werdum, in his first fight with the UFC since his stint with Strikeforce, will need this win to stay with the promotion but I don’t see him getting it.

My pick: Roy Nelson via decision.

Diaz in his latest win over BJ Penn in what turned out to be a 5 round war.

Finally, it’s the main event: Nick Diaz vs Carlos Condit. These two are duking it out for the Interim Welterweight Belt, which secures a title shot against current champ Georges St. Pierre to whoever wins. It’s a big fight and will surely be a battle on the feet. With Diaz’s BJJ, Condit will not want to take the fight to the ground. While I think Condit will be a test for Diaz, I don’t think he’ll be able to take the win. Diaz dismantled BJ Penn in his last fight in a way I’ve never seen the Hawaiian prodigy get beaten before. He’s on a hot streak and he’s determined to get a shot at GSP.

My pick: Nick Diaz via decision.

If you don’t feel like paying $45 for the PPV, head out to a local bar that’s showing the fights and watch. This card will be fun to watch.

That’s it for my weekly feature here at Daily Grind.

DON’T FORGET TO CHECK OUT MY SITE: http://themmainformant.com