Kansas Jayhawkers could be invading Columbia one last time Saturday.

Missouri and Kansas were once at war with each other, literally.  Blood spilled throughout the Kansas territory and western towns of Missouri throughout the 1850’s and the Civil War.  Missouri, a slave state, was trying to dictate whether Kansas would enter the Union as a free or slave state. 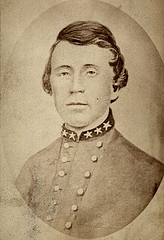 As the Civil War broke out, the Missouri country side and several towns were raided and burned by Kansans.  Two years later a confederate General named William Quantrill led a raid on Lawrence, Kansas.

SI.com producer Dan Georger had this to say on the rivalry: “It’s more than the schools–it’s a state thing going back to the Civil War when, William Quantrill’s confederate guerillas burned Lawrence and murdered nearly 200 people.  Neither Missouri nor Kansas folks have forgotten it.”

The athletic rivalry got off to a quick start.  The University of Kansas named their athletic teams the “Jayhawkers.”  Jayhawker was a term used to describe the Kansas militia that raided and pillaged their way through Missouri towns years before.

The University of Missouri named their teams the “Tigers.”  This comes from the armed guards known as the Missouri Tigers. They protected Columbia during the Civil War.

The first football game between the two schools was played on October 31st1891 with KU winning 22-10.  Missouri would get their revenge on the hardwood though in 1907.  They defeated the Jayhawks and their head coach, James Naismith, founder of basketball, in back-to-back games.

Mizzou held the first ever homecoming in 1911 when KU visited Rollins field for a football game.  Missouri coach C. L. Brewer urged graduates to “Come Back Home” in an effort to boost attendance.

St. Louis native and author of “Border War Football 1891-2009“, Shawn Greene recently told the University of Daily Kansan: “Missouri people really love to hate other people. Not in a mean way. They just really like to dislike people for being from a different place.”

Sadly, the Tigers move to the SEC might end this great rivalry, though it shouldn’t.  Missouri officials have expressed interest in continuing the tradition but bitter KU officials claim “Missouri has shown where their alliances (SEC) are.”

There’s this “thing” called money that rules everything.  If KU was given the same opportunity Missouri has, they would jump at the chance to leave the crumbling Big 12.

It’s too bad KU is holding a grudge that makes no sense.

As of now, Saturday night will be the last time Tigers will have to protect Columbia from invading Jayhawkers.